‘Two-phase or not two-phase’

Two-phase flow at tectonic boundaries to understand Earth dynamics through its evolution. Fluid dynamic applications to planetary systems and modern day problems such as carbon storage. 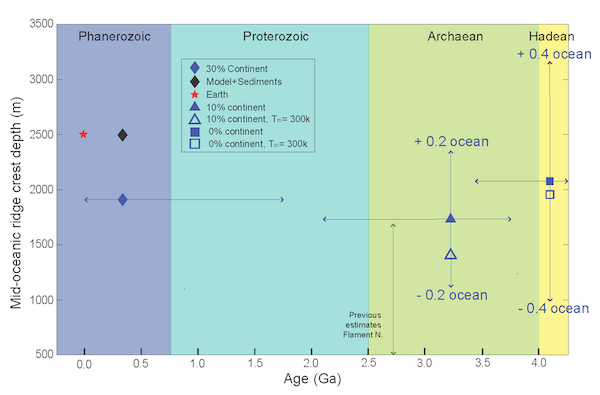 The interconnectedness of life, water, and plate tectonics is strikingly apparent along mid‐ocean ridges (MOR) where communities of organisms flourish off the disequilibrium of chemical potentials created by circulation of hydrothermal fluids driven by Earth’s heat. Moreover, submarine hydrothermal environments may be critical for the emergence of life on Earth. Oceans were likely present in the Hadean but questions remain about early Earth’s global tectonics, including when seafloor spreading began and whether mid‐oceanic ridges were deep enough for maximum hydrothermal activities. For example, plate tectonics influences global sea level by driving secular variations in the volume of ocean basins due to continental growth. Similarly, variations in the distribution of seafloor age and associated subsidence, due to assembly and dispersal of supercontinents, explain the largest sea level variation over the past 140 Myr. Using synthetic plate configurations derived from numerical models of mantle convection appropriate for early Earth, we show that MOR have remained submerged and their depths potentially constant over geologic time. Thus, conditions in the early Earth existed for hydrothermal vents at similar depths as today, providing environments conducive for the development of life and allowing for processes such as hydrothermal alteration of oceanic crust to influence the mantle’s geochemical evolution. [Sim et al 2016]. 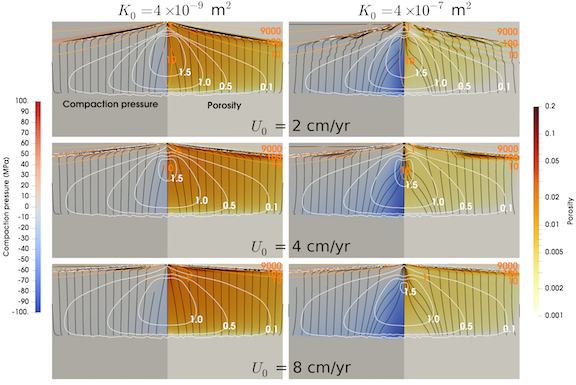 At mid-ocean ridges, oceanic crust is emplaced in a narrow neovolcanic region on the seafloor, whereas basaltic melt that forms this oceanic crust is generated in a wide region beneath as suggested by a few geophysical surveys. The combined observations suggest that melt generated in a wide region at depths has to be transported horizontally to a small region at the surface. We present results from a suite of two-phase models applied to the mid-ocean ridges, varying half-spreading rate and intrinsic mantle permeability using new openly available models, with the goal of understanding melt focusing beneath mid-ocean ridges and its relevance to the lithosphere-asthenosphere boundary (LAB). Three distinct melt focusing mechanisms are recognized in these models: 1) melting pressure focusing, 2) decompaction layers and 3) ridge suction, of which the first two play dominant roles in focusing melt. All three of these mechanisms exist in the fundamental two phase flow formulation but the manifestation depends largely on the choice of rheological model. The models also show that regardless of spreading rates, the amount of melt and melt transport patterns are sensitive to changes in intrinsic permeability, K0. In these models, the LAB is delineated by the melt-rich decompaction layers, which are essentially defined by the temperature dependent rheological and freezing boundaries. Geophysical observations place the LAB at a steeper incline as compared to the gentler profile suggested by most of our models. The models suggest that one way to reconcile this discrepancy is to have stronger melting pressure focusing mechanism as it is the only mechanism in these models that can focus melt before reaching the typical model thermal LAB. The apparent lack of observable decompaction layers in the geophysical observations hints at the possibility that melting pressure focusing could be significant. These models help improve our understanding of melt focusing beneath mid-ocean ridges and could provide new constraints for mantle rheology and permeability. [Sim et al 2020], Carnegie video highlights for AGU 2019, Geodynamics and Tectonics Virtual Seminar, Invited seminar at University of Maryland, Github repository for model inputs 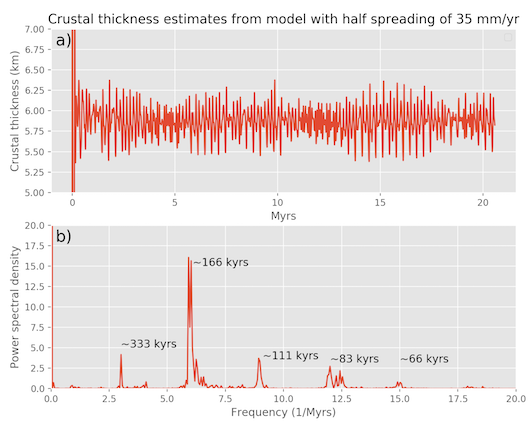 Multibeam bathymetric data from Malaysia Airlines Flight 370 reveal off-axis crustal structure of Southeast Indian Ridge. Record of crustal accretion follows a fractal pattern, with some evidence for increased power at periods of ~300 to ~700 kyr. Crustal accretion patterns could be explained by the combined effects of melt-rich porosity waves and mantle heterogeneities. [Parnell-Turner, Sim and Olive 2020] 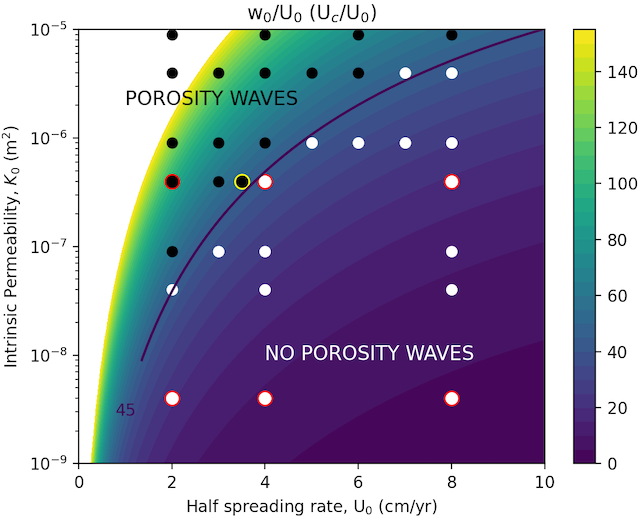 The ocean floor makes up the majority of the Earth’s surface and yet, its geomorphology is not fully understood. Recent debate has focused on whether sea level changes—driven by Milankovitch glacial cycles—generate the abyssal hill fabric of the ocean floor by modulating mid-ocean ridge magma supply. However, periodicities longer than Milankovitch cycles are prominent in the ocean bathymetry. Using crustal thickness estimates from two-phase flow simulations of ridge magma transport, I show that persistent melt-rich porosity waves could be responsible for the ocean floor fabric at periods of 100 kyr and longer, except in the case of fast-spreading ridges. For periods longer than 100 kyr, spectral energy is notably present at large mantle permeabilities regardless of spreading rates. Therefore, two-phase flow models can provide constraints on elusive mantle parameters such as permeability and viscosity when directly linked to the ocean floor fabric produced. Sim 2022

In the deep carbon cycle, the largest contributor of CO2 to the atmosphere are both diffused and concentrated emissions from the subduction zone system. The changing amount of CO2 in the atmosphere affects long term global climate that may be a positive feedback mechanism with tectonic activities. The main potential source for carbon emitted in the arc system is carbonate that enters the subduction zone as seafloor sediments and altered ocean crust. The traditional view of the fate of this carbon after subduction is that most of it is carried into the deep mantle past the subduction zone, due to its high decarbonation temperature and predicted low solubility in H2O-rich fluids. However, recent experimental and thermodynamic modeling of carbon solubility in aqueous fluids at high pressure and temperature settings suggest that a substantial amount of carbon can be carried by aqueous fluids released from the oceanic lithosphere. In this work, we use the carbon solubility model from Kelemen & Manning 2015 (based on DEW, Sverjensky et al 2014) and apply it to a global suite of subduction zone convection models with the goal of understanding the the potential for carbon storage in the mantle wedge. The results presented give us an idea of where carbon species might be dissolved, deposited or stored as aqueous fluids released from the subducting slab move through the mantle wedge. Carnegie video highlights for AGU 2019